One of the comments on my last posting was from Lorri who thought the piece was great but didn't understand the technique. Since I'm not the "mother" of paint-overs I would suggest that anyone who is interested in particulars just google Lisa Bebi. She has a blog and has written many, many articles in Somerset Studios magazine as well as others. I've looked at her work for several years but this particular technique just grabbed me and I dearly wanted to challenge myself to try it.
All things considered I think I did pretty well with the two pieces that I attempted but DH says "size matters" and he wants me to go bigger. These were on 6x8 and 8x10 canvasses. I think I might have a few bigger sizes in my studio so I just might try doing a larger size. I don't honestly know why I freak myself out with the thought of doing bigger pieces. I think it all goes back to that childhood warning of 'don't waste it'. I don't know the real reason but I do know that I'm bushed and even though it's a gorgeous day in Jersey I'm going to crawl into bed for a few extra winks of sleep. I'll probably Twitter later on today, and I might even post again her tonight but I need some down time.
For now, here's another of my latest pieces to chew on :) This particular piece is NOT a paint over but it's still a collage with embossed aluminum cupcake wrapper and lots of beeswax. 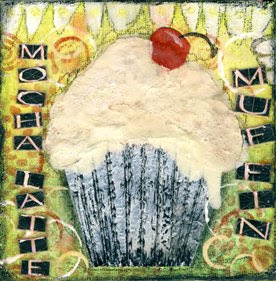 I love cupcakes and they LOVE to reside on my thighs as soon as I gobble them down. My size 8 body could eat a dozen but my slightly more mature figure just slathers 'em right on the places I don't want them to land. lol
Posted by Unknown at 1:46 PM

Express Your Artistic Side! ~ JOIN US