Hospital of the University of Pennsylvania

This is the first piece that I've done to imitate Polaroid's Time Zero SX-70 art photos. Since Polaroid discontinued making the film a number of years ago I've been deprived of the process that I'd fallen in love with back in the early 90's. When there's something I'm hankering for, come 'hell or high water' I'm determined to have it. That's when I decided that if I couldn't have the real thing I had to come up with steps that could turn an ordinary photo into a fine art piece. I'm dubbing my process PseudoSX-70 art. Not surprisingly it takes longer to reproduce this effect on a computer than it ever did when I was manipulating the SX-70 prints straight from the camera. But as with all things I do, this sense of 'controlled chaos' is quite fulfilling!

This is a photo I'd forgotten about but when I stumbled across it yesterday I knew it was the "ONE". I took "EMTs" with a 'toy' camera from the sky bridge that leads from the hospital to the parking garage. The scene caught my attention because of what I perceived to be a perfect moment caught in time. Two EMTs returning to their rig after another ordinary run. 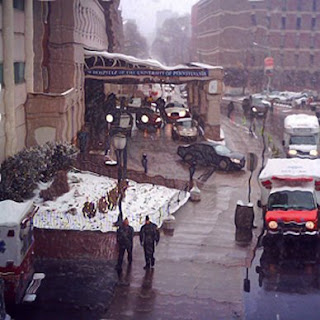 Each photo tells a story but there are stories and then there are stories! I remember this day so well that it can still make me shiver. It was one of those unexpected late autumn snowfalls that turns into a blizzard by nightfall and we were 100 miles from home. We had just finished one of my son's sporadic but crucial visits to a specialist buried deep in the labyrinth of the U of Penn Hospital.

After leaving the hospital we drove north through Philly and then on to a place called Peddlers Village in Lahaska, PA. For all of the 30 odd years that we've been taking our son to specialists in Philly we've always made the same run and we thought that this day would be no different.

It was a Thursday and in the main restaurant of the village it was a reservation only "King's Feast" that started at 4 pm. We reached the village around 3 and spent the time until our 4:30 reservation window shopping. By 3:30 I realized we were in trouble. The wind had picked up and was blowing the snow into drifts around the village square. My husband was undaunted even when I pleaded that we leave for home right then and there. A big bear of a man at 6'7" and 350 lbs. he wasn't about to be cheated out of the unlimited seafood and roasts that were awaiting him inside. My son takes after his Dad so it was a 2 hungry men against one nervous woman. They did, however, agree to go to early and see if we could bump up the reservation time. It was warm in the big waiting room and a fire crackled in the hearth. Besides ourselves there was one other couple for the 4 pm seating.

We sat near a window eating lobster after lobster while I kept a watchful eye on the ever worsening storm. Other than the three of us there were perhaps a dozen other brave folks who came in to feast. And those I can guarantee were locals because anyone who had to come from a distance would have been crazy to brave a storm like that. But the food was amazing and plentiful and by the time we had all eaten our fill and were ready to leave, night had fallen and the snow kept right on coming.

We haven't had a new car since the early 90's and that day we were driving an old green Suburban. I buckled up and started praying we'd be able to make the 90 minute drive without mishap. Past the darkened Delaware on Rt. 29 it was a bit tricky with all of the turns but we literally plowed on...with a guardian angel in there with us I know. It took us 90 minutes to reach the entrance to NJ 195 and that's when our angel took over. As we entered onto the highway we pulled right behind a trio of snow plows clearing the road ahead. My husband's knuckles were white by this time but he stayed behind the center truck and 75 minutes later we were home safely and joyously aware of having had a harrowing but unforgettable journey.
Posted by Unknown at 2:27 PM

Express Your Artistic Side! ~ JOIN US